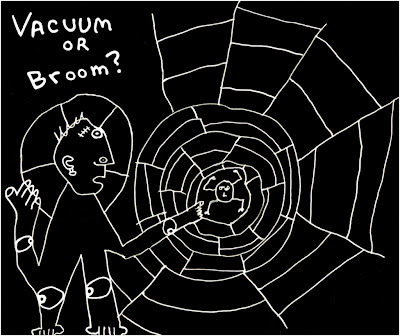 Kim: Today we were talking about entering the stream, and I realized (suddenly) that the stream is where we are. Even those who imagine themselves to be looking onto the stream are actually in the stream. In fact, maybe there is nothing but the stream. I wasn't able to say anything about this in the discussion group I was in. It wasn't my turn to talk. But as others spoke about being in or out of the stream it became clearer and clearer that believing that we aren't “in life” is like people in universities believing that they are in an Ivory Tower. It all happens wherever you are, whether you like it or not.

Bruce:  When you guys mentioned the “eureka” theme, my mind immediately went to an unlikely epiphany I experienced while cleaning my cat's litter box. I'd recently returned home after tending to the ash and incense containers from various AZC altars, when something about the quiet, everyday task of scooping cat waste hit me like a flash. I'm hesitant to articulate exactly what happened, because this seems beneath or behind (or before) the realm of conscious thought. Still, some kind of correspondence between cleaning a sacred altar and sifting through cat litter became suddenly and powerfully apparent. Both activities call for focus and attention on the task at hand. And besides, doesn't Buddhism caution against discriminating between the sacred and the profane (and does it get much more profane than cat excrement)? For me, this incident offers a lesson about being fully present and practicing in every moment, and it suggests that awakening is more random than rational.

Emma: Have you two ever noticed how those moments of awakening, of opening, often have this tender quality to them? For me, they arise with such softness and compassion. Yes, Bruce, I agree that they aren't rational. I never have these kinds of realizations after thinking and thinking and thinking. I wonder about their randomness. They seem random. But I wonder. Perhaps we always plant the seed for them. We sit, we listen, we stay open (or at least try), and when the time is right, when we are ready to see, the realization comes, as if from nowhere.

I love how related your realizations are—that we're always on the path ("in the stream"), whether we're being chiden or cleaning up after the cat, that's it's all life, beautiful, terrible, extraordinary, ordinary life. My favorite awakenings are the ones that humble me, sometimes so much so that I'm dumbstruck. They happen when I’ve been rigid, strongly convinced I am right about something or better than or apart from. Out of this contracted, lonely way of being, I’m shown my place in the order of things, my absolute value in messy humanity.

Kim: I got into my car the other day and felt something crawling on the back of my neck. I brushed it off. “Wow. That was big,” I thought. I turned on my interior lights, but couldn't see anything, so I went on my way. Then today I started to get in my car and a rather giant spider had built a web in the front passenger seat. The foreboding creature was in the middle of the web, waiting for me. At first I thought I'd vacuum him to oblivion, but then I felt a little compassion for the scary beast and thought I'd use a broom to move him outside. Then I started to imagine that he'd jump off the broom back into the recesses of my car and kill me at some indiscreet moment. (Is there ever a discreet moment to die?)

So I vacuumed up the spider and his web. (Was it a he or she? I don't know) Then I opened up the shop vac and saw the poor little dead spider huddled along the bottom edge of the tank. He went from being a beautiful gold color to a very dark brown, after being covered with dust.

I went on my way, rushing to the Zen center to sit. Rushing to sit is always a fun contradiction. Next thing I knew, a car failed to stop at a stop sign and was a few inches from the side of my car. I saw time freeze as I made a sudden swerve and survived the near hit. “Ah ha!” I thought. “Payback for murdering the spider.”

I told my wife my theory about the near accident. “But you weren't in an accident. How is that payback?”

Bruce: It's very interesting that you describe a near-hit, Kim, because I was just thinking about something I once heard on a Zen podcast. This person observed that enlightenment is accidental in the sense of striking us unexpectedly, when we're not looking. Yet while we can't aim for awakening, exactly, what we can do is make ourselves more "accident-prone" through regular, mindful practice. Also, I have to say that "rushing to sit" reminds me of the expression "hurry up and wait."

Emma, you remind me that my favorite poetry captures the miraculous in the mundane, the “extraordinary ordinary, ” as you put it. And you're probably right to suspect the randomness of these eureka moments. Maybe this is how we're able to redirect karma, by planting seeds. Still, in typical Zen fashion, it's not a direct process of creating Cause A in order to reap Benefit B: in that sense, “deliberate randomness” may be a reasonable way of framing it. Live mindfully, simultaneously cultivating skillful means and letting go, trusting that the moments of realization and opening will come.

Emma: Ooooohhh. I like “deliberate randomness,” Bruce. It reminds me of this drawing I've seen of a man fishing from a dock. Next to him is a basket. A fish from behind him is jumping out of the water into his basket. What a great image for deliberate randomness. We can set the stage (and fish our hearts out) and then let go of how, or even whether, the fish will actually come to us. Someone very dear to me once told me you can have everything you need if you're not attached to where it comes from. He said it during a time of many small and large awakenings for me, the beginning of my redirecting my attention from what I thought was going to make me happy (by force if necessary). Perhaps it was the death of my Bulldozer Nature, or at least my first notice that trying to force my life to be how I wanted not only wasn't working but was making me miserable.

My Zen practice is the first thing I've ever done where I've given myself permission to be gentle, to take it slow. Although I sometimes have the odd thought I'm not doing enough, or doing it “right,” (yesterday, I decided I wasn't reading enough), I feel I am being drawn to practice by a childlike sweetness and an adult desire for wholeheartedness. It is extraordinary to me that we come together to learn how to be present. It's an entirely different process unfolding. I like your story, Kim. How different to even ponder not killing the spider. That's what meditation reveals to us, right? The pauses, the awareness of the gap between urge and action. It gives us the time to notice that we have a choice whether we will respond or react.

Bruce: I can totally relate to Bulldozer Nature, as that was very much my M.O. for many years (not that I'm claiming to be totally beyond it now). Also, the gap between urge and action was exactly how I was describing the effects of meditation on myself to some friends about six months ago.

As for blending childlike sweetness and an adult desire for wholeheartedness, my experience suggests that children are sweet, yes, and authentic, but without desiring to be so, without having to think about it. They're also angry, impatient, and various other flavors of not-so-sweet: point is, they are whatever they are in any given moment, slipping into and out of mind/emotional states much more readily than most adults. So you know that statement attributed to Jesus about needing to be like little children in order to reach the kingdom of heaven? I think he was on to something with that.

Kim: A dog came up to me and sniffed my pant leg. Satisfied, he walked away. Did he smell the dog that I'd been with? Did he think, “Oh, he was around a dog that smelled like . . .” As I watched the sniffer, I was particularly interested in that point at which the sniff made sense. He was so abrupt at that certain point, as if saying, “Ah ha, I know who he's been with.” We move from being an input device to a central processing system. We think, “I have the data. Now I know.” That, for me, is “eureka.”