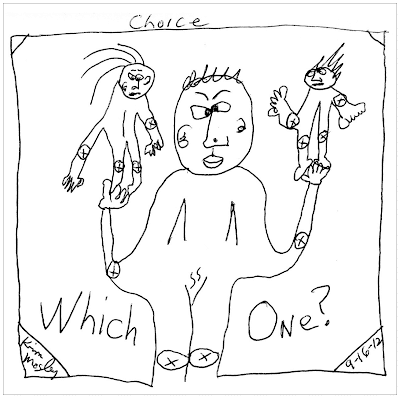 Kim: My son asked me if we were going to drive his kid to school when we come to Phili to child-sit, or would he take the bus. I told him that you shouldn’t make decisions until you have to. He said “really?” Then we started talking about choices and I said that one could be peaceful in their choices. He wrote back to me later that day, “every choice is a brutal amputation.” One thing I see with kids is that they are who you (the parent) were. We hear at the Zen center all about attachment. Seems like we attach ourselves unnecessarily to our choices, our positions (the Republican Convention is on TV now). So what was Robert Frost talking about in “Two roads diverged . . . and sorry I was that I could not travel both.” Is the voice his, or some unenlightened individual who doesn’t understand that one doesn’t have to be sorry? Or do you?

Emma: I read a great quote yesterday by John Welwood about a misunderstanding around nonattachment. He said that nonattachment should not be confused with avoidance of attachments—that avoiding attachments to people is just another form of clinging—as he says, “clinging to the denial of your human attachment needs, out of distrust that love is reliable.” I think it is so easy to fall into the trap of avoidance and denial, especially of difficult feelings. Maybe nonattachment can be, but doesn’t necessarily have to be, about peaceful choices. (If it can only be about making peaceful choices, there’s another attachment, right?)

Deeply feeling my sadness around not being able to take both roads, or regret about the road I did choose (Frost’s speaker says he’ll be telling “with a sigh”), is not necessarily an indication of my being attached to choices in an unhealthy way. I think it’s actually just an acknowledgement of what is. Here’s a possibility: I must make a choice, fear and confusion arise, I make the choice, perhaps there’s regret, sadness arises when I consider what might have been, and then I move on. I can imagine a scenario where that could happen and the nonattachment would be about not being attached to any part of the process, not getting stuck anywhere along the way. My feelings are my feelings; if I have a hard time making a choice, that’s what’s real for me. It doesn’t make me unenlightened. It makes me human.

That said, I don’t think every choice has to be a brutal amputation. Cheri Huber talks about how our ego/self-hate creates an alternate reality in which we’re living out our other choices for the primary purpose of torturing ourselves in this reality. I can resonate with that—“if only . . . ” can be such a painful thought if I believe that what is happening right now is fundamentally wrong and could be different. Accepting that what is happening right now is happening and cannot be any other way (how could it?) feels important. We can never know how life will unfold; having to make choices just gives us an opportunity to remember that.

Kim: This is especially meaningful because I grew figs in St. Louis. They were from a fig plant brought from Italy at the turn of the last century (mafia family). My barber gave them to me. Most years we hardly get any figs. It wouldn’t be a long enough growing season. This is really too about my next post . . . about choosing life or not.


“I saw my life branching out before me like the green fig tree in the story. From the tip of every branch, like a fat purple fig, a wonderful future beckoned and winked. One fig was a husband and a happy home and children, and another fig was a famous poet and another fig was a brilliant professor, and another fig was Ee Gee, the amazing editor, and another fig was Europe and Africa and South America, and another fig was Constantin and Socrates and Attila and a pack of other lovers with queer names and offbeat professions, and another fig was an Olympic lady crew champion, and beyond and above these figs were many more figs I couldn’t quite make out. I saw myself sitting in the crotch of this fig tree, starving to death, just because I couldn’t make up my mind which of the figs I would choose. I wanted each and every one of them, but choosing one meant losing all the rest, and, as I sat there, unable to decide, the figs began to wrinkle and go black, and, one by one, they plopped to the ground at my feet.”
~ Sylvia Plath, The Bell Jar

Emma: Oh, Sylvia, great voice of the wounded! Yes, this makes me think of how necessary it is to take the time to mourn the figs at our feet . . . to take the time to notice them, say goodbye, and move on. I think that’s how we stop ourselves from becoming bitter. It is self-brutality to pretend they’re not there or to stare at them ceaselessly. Both denial and regret produce frozenness, immobility. How much easier it would be to make choices if we knew clearly that the fig tree that is our lives does not dry up because we haven’t been able to make up our minds. Choices will keep appearing, over and over again. Life never gives up on us. We can give up on it, in moments of true despair and illness, as Sylvia did. What a place of utter darkness she must have been in, to believe that suicide was her only choice.

Kim: Is suicide the only real choice that we make? Not just suicide of our body, but suicide of our feelings. Somewhere I remember Camus writing that you can’t live until you make that decision not to take your own life. We are thrust into the world without our choice. We push the boulder up the hill to watch it fall every evening. How many choose—really choose—to live? What would that mean for me?


“For his whole career Camus wrestled to come up with a reason not to commit suicide. He then penned a seminal article, The Myth of Sisyphus, outlining the futility of life concluding that “there is only one truly serious philosophical problem, and that is suicide.” Self murder was his only way out of the Sisyphean task of life. If a man realizes his life is pointless, he can either keep rolling the boulder up the hill only to have to roll it again tomorrow, or he could kill himself and end the misery. This was the existentialist’s great controlling guideline. If a restaurant only has Coke or Sprite, you can choose either drink, or you could kill yourself. You have at least that control. Ironically, Camus died young in a car accident before he could decide to kill himself.”
~http://thecripplegate.com/dissatisfaction-guaranteed-sartre-sisyphus-and-solomon/

Emma: We have to make that choice over and over again, to choose to keep living even when it feels as though this thing will be the one that we won’t be able to take. Taking suicide off the table changes things—it leaves no exit (to use the language of the existentialists). Then we must face what is in front of us or perhaps continue choosing and and letting go of other kinds of death—obliteration through alcohol or drugs or disconnection through television or other people’s drama. I guess there are a lot of ways to “die,” or take our exit out of the present moment, and as many opportunities as we have breaths to return to now.

Kim: Last night I went to a yoga class where the students are very lax about where they put their mats. They don’t seem to anticipate that more people will come in. In fact, they arrange their mats just to drive me up the wall. I’m usually the first one there, and I want to control where the mats go. But no, I choose to keep my mouth shut and fry inside. Then the teacher comes in. I think, “at last, we’ll get a semblance of order in this room.” But no, he’s oblivious to the chaos in the room and attends promptly to the chaos in our minds.

Here we have a succession of choices. The students choose where to put their mats down. Then me with the OCD-like desire for everyone to choose to love order. And then the teacher who doesn’t walk on the floor, but chooses to floats into the room, unmoved by the chaos. Each of us chooses where and who we are.

What did I learn tonight? It is ok where things are.

It better be. They are!

Perhaps “death” is wanting things to be different than how they are. Death is thinking that everything is done in the world as a punishment to ourselves.

I was relieved to learn that the Buddha did not believe that every good and bad thing that happened was the result of someone’s good and bad karma. Things happen. People place their mats on the floor where they belong. Right? Wrong? That’s my problem, not theirs.

Emma: Yes! Things happen. Of course. It feels like just more attachment to say there’s always a reason for everything. We want to believe we’re all-powerful because we think it’s less scary. But how painful it is! If we’re all-powerful, if everything that happens is a result of our karma, then we’re responsible for everything, and every choice really is life or death.

I like to think I’m free to make good choices and terrible choices and see it all as learning.
Posted by Kim Mosley at 6:05 AM