What Is Santa About? 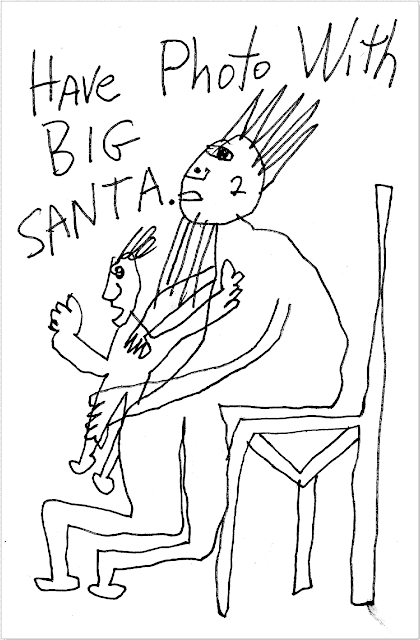 Kim: What is Santa about? Why do we deceive kids? Is it just because we can? Are we interfering with their ability to see things as they is (as Sukuki Roshi would say as his way to remind us that there is only one thing)? What about Santa having kids sit on his lap for that photo after we tell them not to let a stranger touch you? What other deceptions do we teach kids? God, Jesus, you’ll live forever, adults are happy? What will I tell my Austin grandson when he asks? At what age can a kid understand that Santa is just a metaphor? Do they have to first be deceived into believing Santa and the elves give toys to all the kids on Earth?

In improv we learn that asking questions is not a good way to have a conversation. It puts the hot potato into the other’s lap.

So I’ll start again. I think my parents taught me that only things that you could see were real. They had no interest in deception. God, to them, was the big deception. Santa was of no interest to them. My Phili grandkids call me Grandpa NoFun. I wonder why?

Emma: Well, Grandpa NoFun, I can see your Phili grandkids’ point. I remember feeling delight when I used my burgeoning higher-level thinking skills to conclude there was no Santa Clause. My cousin and I felt very clever in realizing that his appearance at multiple shopping malls around New Zealand made his existence highly suspect. All around he was a delight—there was the delight in believing in a mystical grandfather whose sole purpose was to bring gifts to children and delight in finding out for myself that he wasn’t an actual person. I think Santa is fine when he’s about play, expectation, delight: he’s a way to make a holiday precious for children. For me, the deception comes in when there’s rigidity, when parents use Santa for their own purposes. If my parents had continued to insist there was a Santa after I’d figured out decidedly that there wasn’t, I would have experienced that as self-centered deception (because it would’ve been about them and what they needed.) If they’d used threats of Santa’s abandonment throughout the year as a means to get me to be “good,” I would've hated the man. It’s not Santa or a belief in Santa that’s terrible, it’s what we do with him, same as with most anything, really.

There are mystics who say God is the most commonly used term for “all that is.” Why is teaching children about God or Jesus a deception? Is it deceptive to teach children about the Buddha or Suzuki Roshi?

Kim: Here’s my grandson about God:

This was a year ago. Now, according to Jasper, there is no God.

Emma: Jasper is very wise. His answers to your questions are perfectly reasonable to him, and he seems deeply in touch with what he wants—he knows when he’s had enough questions and wants to go see his dad, for example. To me, this deep connection to our wisdom is god. Deciding that the god of a year ago doesn’t work for him is also wise. The trouble with God (and Santa) isn’t God (or Santa); it’s that God and Santa are us and we are Them. I think the trouble is when we think there’s something not us to know about them. It’s when we get all stiff and rigid and "idea-y" about this stuff that it causes havoc. I love Thomas Merton’s quote:

“If only they [people] could all see themselves as they really are. I suppose the big problem would be that we would bow down and worship each other. . . . At the center of our being is a point of nothingness which is untouched by sin and by illusion, a point of pure truth. . . . This little point … is the pure glory of God in us. It is in everybody.”

It amuses me that every time I look the quote up online, I find it on a site that is explaining why it’s the doctrine of the devil.

Kim: I was reading this essay on anger by the Buddhist therapist Mark Epstein. He talked about how the therapist is able to be non-judgmental because he/she resides equidistance between the id, ego and superego. Maybe that’s where God/Santa resides too. And maybe Freud was short sighted in thinking the ego mediates between the id and superego (that can only lead to a constant battle). How do we learn to stand in the center? At once, our center, too. That’s where I want to be.

I don’t know where Jasper got his thoughts about God. His parents are not believers. And I don’t know that my kids were ever fooled by the Santa story though we did have pretty cool Christmas morning events when they were young because Linda’s parents would be there. Now back to the original question, “Is there a Santa?” What has been gnawing at me is that if you convince the kid that Santa’s an earthling and then the kid discovers that the chimney is just a piece of stove pipe and not big enough for an elf, the kid rejects Santa completely. Or you tell him God loves him and then he meets up with loss and he stops believing. Next time I have kids I’m going to jump ahead and just tell them about the spirit of Santa/God . . . something that they can hold in their hand forever and “own.”


Emma: That’s a beautiful gift, Kim. Perhaps it’s all we really ever need on the spiritual path, a little God, a little Santa, a little Buddha, all of our own.
Posted by Kim Mosley at 5:45 PM